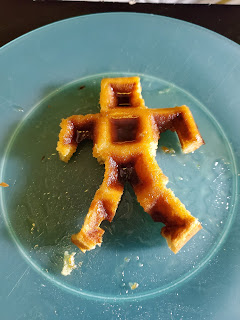 Last week on a whim, I decided to liven up the dinner routine.  To do this, I told my dinner table counterparts, dinners were not going to be repeated.  Awesome, new dinners!, they chimed.  The gang is always up for new grub.  Then I told them the rest of the catch, the caveat: they were going to be served a new dinner every day for an entire year.

An entire year.  Smiles did not fade and there was no ponderings if I had gone mad.  Just some general questioning as to why?  The answer was simple: change.

There are about a million different recipes out there in the vast world and our plates vary with the same 30 or so meals.  These much loved dinner meals served are tried and true (T&T) and are rotated depending upon time, season, and how long it was since last eaten.  Some meals can be served more than others and other meals served just once every other month or so.  Occasionally a new recipe will be thrown in there for fun, but nine times out of ten, the new recipe will not be made ever again.

Having now maintained this new daily meal vigil for just over a week, I decided it time to document this crazy journey.  Unlike most cooking blogs, this is not one you can follow with step by step beautifully photoed instructions, watch a quick fast forward video showing the entire cooking process, or one where you can read about the how the recipe came to be, how it affects day to day life, yadda, yadda, yadda.

This is simple a blog stating what recipe was tried and judged for likeness.  If liked, modifications, if any, for future cookings will be included and judging is simple:

Credit will always be given when credit is due with a link.  Any thoughts or ideas on the original sources are not intended as bashings, just a difference in taste.  The same as there are people who love and only eat McDonalds and others only Burger King.  Neither is wrong.

Eating Waffles is just about breaking out of the routine and trying something different.  Like being allowed to play with your dinner before eating, cause who wouldn't have liked to make a waffle man when they were kids?  So if you have stumbled across this blog, welcome and enjoy.  Maybe it will inspire you to try something new, too.