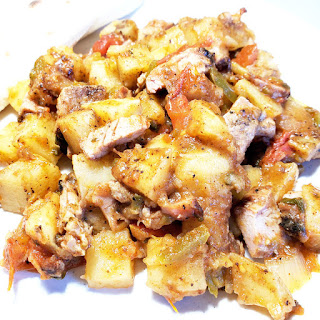 It  is a crying shame that there are six hens and not a egg in sight. What am I supposed to do with homemade ranchero sauce? Thankfully with a few quick searches of the internet a recipe from my hometown newspaper was discovered: Papas Ranchera. Not once in the thirty years I lived in my hometown did I ever eat at a local food joint serving papas rancheras. No time like the present to remedy this cultural dish.
Because this recipe is hidden behind a paywall (grrr...) I have included it here for you:

Servings: 4-6
Ingredients:
1 pound potatoes, diced
1/4 cup vegetable oil
1/2 large onion
1 1/2 medium tomatoes
3 jalapenos
1/8 teaspoon garlic powder
1/2 teaspoon salt
1/2 cup juice from canned tomatoes
Instructions:
Fry potatoes in vegetable oil until lightly browned (about 4-6 minutes).  Saute onions, tomatoes, jalapenos until soft.  Add garlic powder and salt. Add tomato juice until vegetables are covered (may need to add water).  Bring to a boil and then add potatoes.  Cover and reduce heat to a simmer and cook until potatoes are soft.  Serve on a corn or flour tortilla.
Modifications Made:
There were some serious missing instructions on this recipe.
Potatoes were peeled, diced in 1" cubes, and fried in fine layer of vegetable oil.  Just enough oil to keep potatoes from sticking but not enough to swim in or to result in french fries.  Potatoes removed to drain. and oil was wiped from skillet.  Return still hot potatoes to skillet, add two cups diced leftover pork fajita meat and two cups leftover ranchero sauce.  Simmer on low until potatoes fork tender.  Serve with flour tortilla on the side.
Scaled for Likability:  Great
Don't know how I missed this growing up.  If I ate a local Mexican food joint one a week then I ate at three or four a week.  Using leftover ranchero sauce was a great resource but the texture was lost on the second cooking.  If I had known ahead of time, the ranchero sauce would have been made in much larger chunks or not fully cooked the first time.  The addition of the fajita was the key ingredient.  It added a much needed chew texture along with some protein.  If meat had been left out, two fried eggs or a side of charro beans (maybe even fresh homemade refried beans) would have been added.  Delicioso!
Word to the wise, make extras for leftover tacos the next day.