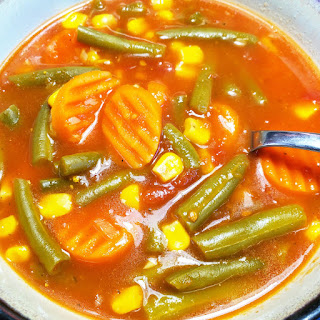 Went to the store with the hopes of gathering fresh produce for soup. With more than 45 people in line for two packages of any meat product and the produce section containing only avocado, orange, and most randomly, strawberries, I settled upon canned soup.  Well not canned soup since that section was still void of food, too.  Instead soup made from canned goods as the canned vegetable section had been mostly restocked. Soups like this 15 Minute Vegetable Soup are ideal in dire food situations such as current times.
Modifications Made:
Plain petite diced tomatoes for flavored tomatoes, frozen carrots instead of canned, green beans and corn undrained, peas omitted (gross, nasty little pods), one can tomato sauce, two low sodium chicken and two pollo de tomate bouillon cubes, six cups water.  Once onions were softened, carrots, juice of green beans and corn, sauce, bouillon cubes, water were added and allowed to simmer until carrots almost tender.  Green beans and corn tossed in, heat turned off, and soup allowed to rest for 30 minutes before eating.
Scaled for Likability: Great
One my most favorite canned soup is Campbell's Old Fashion Vegetable or the Chunky version with meat.  Love the just as much as the chicken noodle soup.  Plain, simple, delicious.
This soup was just like the condensed soup but better.  Less salt, more flavor.  Only thing missing was a chunk of fluffy white bread to soak up the good stuff at the bowl bottom. Yum yum.