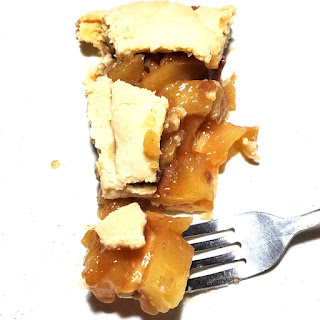 Way back when, a box of frozen pie shells were bought and there was still one rolled pie shell in the freezer waiting for inspiration.  What better to bring on the Thanksgiving cheer than canned apple pie or in this case an oversize handheld apple pie.
Ingredients:
One frozen pie shell, defrosted
15 oz canned apple pie filling
Cinnamon
Nutmeg
Three butter dabs
Instructions.:
To half the pie shell, place apple filling, a sprinkle of cinnamon, a dash of nutmeg, and three butter dabs leaving a one inch edge.  Fold over remaining half of pie shell, pinch edge closed, and foldover to create half inch pie crust edge.  Cut three slits in top for steam escape.  Bake at 350 until crust is done.
Scaled for Likability: Good
Well, it was no homemade apple pie but it was way better than those fried handheld apple pie that so many fast food joints sell.  Its a good thing the apple was not made into a pie and the crust did not hold its form and crumbled when cut, crumbled with served, and crumbled when placed in the mouth.  It was great, it was like dutch apple crumble without all the extra sugar.  Too bad it was only half a pie shell as it would have been great with a small scoop of ice cream!