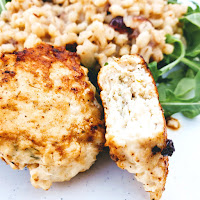 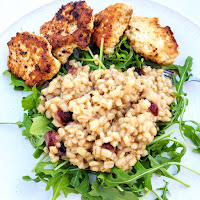 Success is golden. In this case it is golden Russian Chicken Kotletki (Patties) served over golden Barley Wild Rice Cranberry Pilaf on a plate of arugula.
Modifications Made:
Chicken: Garlic panko bread crumbs instead of italian bread crumbs.
Pilaf: Wild rice, walnuts, and feta were omitted.
Scaled for Likability: Great
Russian Kotletki has been in the saved recipe folders for months.  The blog was odd to read (much like mine) and the pictures were hard to judge (much like mine).  All I can say is the entire table is sad as there was not enough for leftovers in a pita pocket with arugula and honey mustard dressing.  So sad.
Pilaf would have been great with wild rice but there just was none to be had.  The sauce was a little too much causing the barley to be sticky but the flavor was great.  Especially when served over the bitter green arugula.  Next time, I want to try Simply Barley Pilaf with cranberries added at the last five minutes or so they soften.