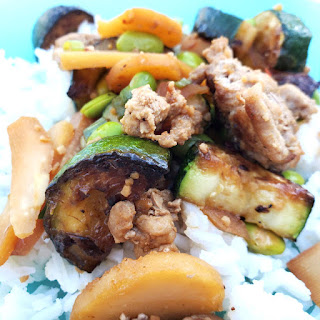 Just when I thought all the good stir fry recipes had been discovered, bam! a new one appears. One like no previous stir fry before. One with the simplest of sauce ingredients. One using ground pork instead of the traditional beef or chicken. Spicy Ground Pork and Zucchini Stir Fry was going to be a success, I could just tell. It was gut feeling!
Modifications Made:
Sauce: soy sauce was increased to four tablespoons instead of three, sambal oelek was decreased to two teaspoons. To the sauce the following were added and allowed to soak in the soy mixture while dish was prepared: a half can of water chestnuts, half can of bamboo shoots, and one bunch of thinly sliced green onions.
Stir Fry: pork was cooked as instructed (minus the addition of salt) developing a nice dark caramelized coloring to the chunks. Zucchini measured at just over a cup, diced. To compensate for zucchini a half bag of edamame was added.
Scaled for Likability: Great
Not once to my recollection have I ever seen ground pork in a stir fry. The table counterparts were leery but seconds were served all around. The meat was a little dry (attempts to secure browning might have resulted in over cooking) but when added to the soy mixture became moist and tasty. The water chestnuts and edamame added a great crunch texture to the soft zucchini and tender pork.
This dish would have been just as wonderful if it was served without zucchini or edamame. The pork was amazing in both flavor and texture. Next time I want a veggie free dinner I am gonna make this and increase the sauce to cover the rice. Delish.