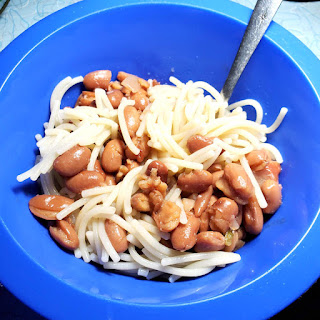 There are many of college meals that were never to be eaten again, rice pilaf and tuna.  Then there were those college meals we just can't part with even when they scream broke ass college student food.  My argument, it's good stuff!  Fideo and Charro Beans is that meal.

Instructions:
Fry fideo in skillet until toasty in color.  Cook fideo in water till tender.  While fideo cooks, warm beans in a saucepan.  Add cooked fideo to beans.  Serve.

Scaled for Likability: Great
Dinner for two for less than a $1 in college.  What else needs to be said.  Now it is dinner for three for less than $3.  Still can't complain.