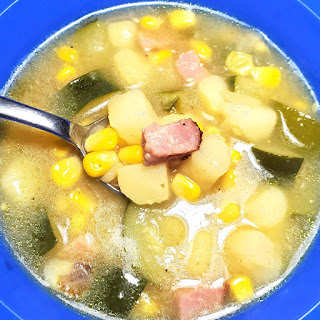 Sometime during the summer a recipe was sent for me to try. Being Zucchini Corn Chowder it was saved for cooler weather.
Modifications Made:
Bacon was omitted and smoked ham hocks were used instead.  Cream was omitted as cream based soups are not very popular at this table.  None of the soup was pureed.
Scaled for Likability: Good
Oh yes, this would have been fantastic as a cream based soup or chowder with lovely little oyster crackers.  It would have been better without zucchini.  Over the last year, I have come to the conclusion that unless zucchini is shredded and baked in a bread or sliced thin and deep fried, I do not care for the texture of zucchini anymore.  And to think, it was one of my favorite veggies as a child.  If I could just take out the zucchini and blitz it into oblivion and add back to the soup then that would be ok.  Soup would also have been great without meat products with veggies just fried in bacon grease for some extra flavor.  Instead of corn, maybe a can of creamed corn could be swapped.