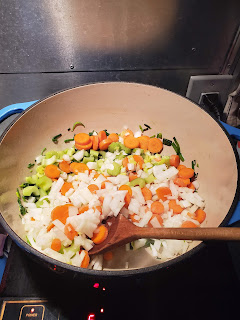 Several weeks into eating one new meal a day, I decided to veer off course of the normal dinner searches.  Venetian Fish Soup was just the ticket.  It started out so well with the staple ingredients one would use for gumbo but with added leaks. 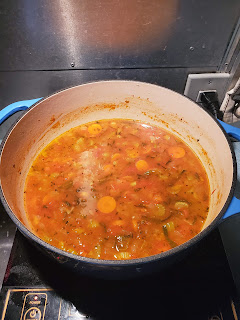 Sadly, it ended up not being a fancy, tasty meal one would believe would represent Food and Wine Magazine.  Or it could just be, after all this work, it wasn't yummy my standard go to New Orleans gumbo.  Bummer.

Modifications Made: In preparation, the fennel was not added as it not locally available.  Unlike the recipes states, this was not served as soon as the fish was done.  The soup was left to meld in flavors over night in hopes of creating better flavors.

Scaled for Likability: No, Thank You.
Even served with crusty bread, this soup was little to be desired.  I tried and tried and tried.  Dinner was eaten but left overs, which was more than half the pot, was tossed to the scrap bin.  Hopefully, the raccoons like fish.