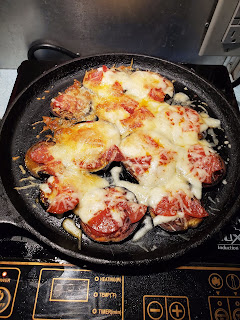 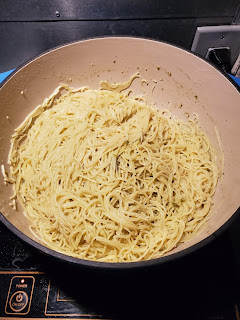 Keto diets are all the rave.  To m, it is a renamed South Beach or Atkins diet.  No carbs, no sugar.  Lots of veggies, cheese, meats.  Been there done that a thousand years ago.  The thing is, some of the recipes from any rave diet actually look good, like these Zucchini Pizza Bites.  Needing carbs to sustain my table counterparts, I made Buttery Garlic Pasta.

Modifications Made (Pizza): Instructions were followed with omission of oregano and Kraft Italian Five Cheese Shredded Blend was used instead of just Parmesan cheese.  Pepperoni slices were cut in quarters for easier placement on smaller slices of zucchini.  Cooking on a cast iron skillet offered a crunchier bottom than a cookie sheet.

Modification Made (Pasta): Recipe only called for an 8oz box of pasta.  Hating half open boxes of pasta, the recipe was doubled.  Only one stick of butter was used.  Doubling the butter would have required one and half sticks and for a pound of pasta, that seemed like an absurd amount of butter.  Garlic was tripled in amount, Parmesan cheese was increased to 3/4 cup, and parsley was omitted.

Scaled for Likability: Great
Unless your vegan, this is a great meal!  So simple and tasty. I don't think I would have served this with out the noodles as the noodles were the filling portion.  Having to double or triple up on the pizza bites would have required eating two to three zucchini each.  Besides, who needs a reason to eat buttery garlic noodles!  Delish.