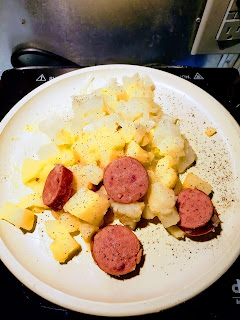 Way back in our broke college days, a buddy who was raised with 10 other family members in house, showed us his money saving dish.  It was filling, tasty, easy, and cheap.  It was (and is) a perfect meal.  Of course, our version has been scaled down to only serve about four people, not ten.

Modifications Made from Original Recipe:
Jesse used to cook the potatoes as thinly sliced, covered in butter, and baked much like this.  Baking buttery potatoes in the oven is better but as the years went by too little time to bake for 45 minutes and too little of cool weather to run the oven lead to boiled butter potatoes. Cabbage was served as large pieces instead of pieces but required to the use of a knife at dinner.  Not wanting the hassle (or dishes) cubed cabbage was developed.  As a result cabbage cooking time was also reduced.  Nice.  And finally unlike Jesse's dished plate of three separate sections, mine is tossed all together ensuring every bit has butter and pepper, cabbage, potato, and sausage.

Scaled for Likability: Great
As before, of course this would be a a great since it came from the T&T collection.  Jesse's Special has become one of those home cooked meals that takes you back to a better time and place.  A place filled with memories.  Not always fun memories as we were broke college students but memories of a time when we were at the top of our game and being broke only made it more adventurous. Memories of midnight racquetball games and long weekend "study" sessions. Memories of too many projects, not enough time, and deadlines.  Mostly, Jesse's Special invokes memories of what the future would hold for us after graduation.