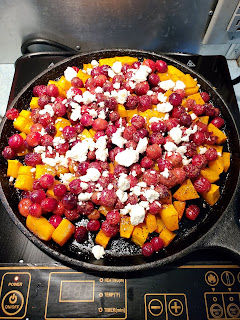 Trying to eat healthy meals that are filling for longer than an hour is turning out to be difficult.  In my readings, I discovered veggies with higher fiber content should sustain energy levels longer.  What better way to test this theory than with Honey Roasted Butternut Squash with Cranberries and Feta.

Modifications Made:
This recipe was followed exactly as written which is something I think I have never done.  Ever.  No wait, I didn't.  Sprinkling of parsley was omitted.

Scaled for Likability: Great
Fantastic!  Cannot say enough about this meatless hearty dish.  It would have been utterly over the top if it was paired with fresh roasted turkey breast.  Squash was in fact not squashy but cooked to a perfect firmness.  Cranberries were cooked to softness yet some retained their "pop" when eaten.  Feta chesse was the only part of the meal I was leery.  Feta is Greek food.  When first served, I forgot the feta so the first few bites were fetaless.  Initial bites were tasty but sweet.  Bites with feta, a salty addition, was the ingredient used combined all the flavors.  So yummy.  As for the long term filling, not so much.  In fact, when made again, I would double the recipe so there was larger servings and maybe even some leftovers.  Yum.