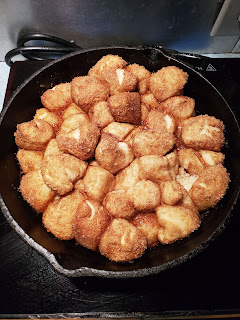 Leftover night means either breakfast, lunch, or dessert needs to be something new.  Breakfast is difficult to achieve, lunch never happens, so that leaves dessert.  Not one to complain about having dessert but having little time and few ingredients to make a new cookies, I made a cheat dessert.

Monkey bread is fantastic.  Homemade bread rolled in sugar and cinnamon and then drenched butter.  Yum.  But like I said, there was no time for cookies much less homemade bread.  Enter store bought biscuits for Cinnamon Sugar Pull Apart Loaf.

Modifications Made: Reducing recipe to just half, only one can of biscuits was placed inside a 12" cast iron skillet instead of a loaf pan. Biscuits were cut in quarters, rolled in cinnamon and sugar.  Stick butter was swirled on the bottom and pieces of Country Crock were scattered around the bites during cooking.

Scaled for Likability: Great
This was the bests parts of cinnamon toast bread made the old fashioned way where bread is buttered, then sprinkled with cinnamon and sugar then baked in the oven.  The Sweet Biscuits Bites were crunchy on the bottom, moist in the middle, and had just enough butter.  They could have used more cinnamon and sugar but that is a preference to me.