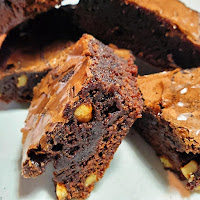 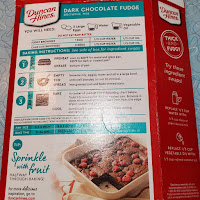 Oh my word how does a space as small a pantry becomes so disorganized? And in such a short time, nonetheless? While reorganizing the four 2x4 pantry shelves yesterday a golden back of the box recipe was discovered. Milk Brownies. Replacing yogurt for milk or applesauce for oil, these are commonplace alternatives. Milk for water in a box brownie, this had to be tried.  Stat.
Modifications Made:
Per the box, 1/3 cup milk replaced 1/3 water.  Half cup of chopped walnuts were added along with two tablespoons of Hershey chocolate syrup.  Because why not.
Scaled for Likability: No, Thank You
The milk was fine, the extra chocolate was fine.  Walnuts could have been doubled. The problem was the brownies themselves.  I accidently made cake brownies with two eggs instead of fudge brownies with just one brownie.  So sad.  These were given to the neighbor who prefers cake brownies.  If the neighbor liked fudge brownies (they are the best kind) these would have gone to the chickens. They have no opinion.