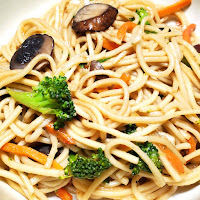 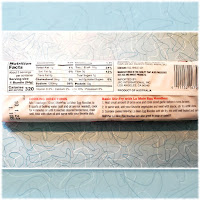 Lo Mein is one of this tables' T&T recipes. The original recipe is long gone but the idea is all the same: thin spaghetti noodles, stir fry veggies (less is more), and a sauce. So far back of the box had had mixed reviews and I thought for sure this recipe would be a guaranteed win.
Modifications Made:
Instructions were written at the most basic level which left lots of room for interpretation.  Noodles were cooked as instructed, rinsed with cold water, and set aside.  Sauce was equal parts soy to oyster, a splash of sriracha and a splash of sesame oil.
Scaled for Likability:  Good
Sauce was good, veggies were good, noodles were sticky.  As in so sticky they stuck to the fork/chop sticks.  Don't really know what went wrong other than they were so sticky.