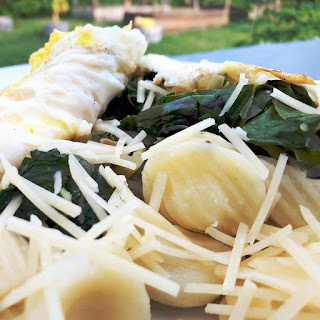 Chard has become my new favorite homegrown veggie. This late in the summer it's the only thing still happily growing. Last week was the first time swiss chard was cooked with stems. Oh, the lovely crunch. Another recipe had to be found with stems asap. Ocecchiette with Rainbow Chard, Parmesan and Lemon was the lucky winner.
Modifications Made:
Times to cook swiss chard stems was longer than the stated 1-2 minutes as the recipe stated but this was expected as stems were cooked last week. Total cook time for stems was 5-7 minutes.
Once the swiss chard had started to soften, one tablespoon of pre-chopped garlic was added. If added sooner, it burns.
Lemon juice along with the zest of one lemon was added as I had already added the juice when the instructions were fully read.  Pasta water was omitted as it is heavily salted. Extra hot water added to create the saucy consistency desired on the chard mixture.
Pasta and chard were not mixed together. Instead each component was layered on the plate separately: pasta, chard, Parmesan cheese, two fried eggs.
Scaled for Likeness: Great
This whole meal can be summed up with this statement from the teen counterpart: "is their enough for seconds?"  Really, what else needs to be said?
In case you don't have teens, the dish was the perfect amount of garlic and lemon for chard sauce to cover the noodles. Shredded Parmesan, instead of grated added another nice texture element. Red pepper was hit and miss but the piece de resistance was the two fried eggs. It has to be said, this might just be added to the T&T list.