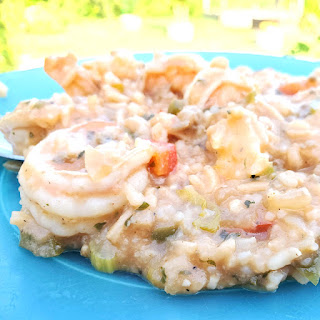 I don't know anyone in the south who doesn't love cajun/creole foods. It is spicy, ladened with meat and fish, and is good either in soups or stews or skillet dishes. The main difference between the two dishes is Creole is usually tomato based and cajun is not. Cajun Shrimp and Dirty Rice Skillet is not really Cajun at all but Creole. Tomato, tomato, either, either, it's the final product that matters.
Modifications Made:
Garlic was doubled.  One pound of Boudin and one pound of shrimp seemed excessive.  Therefore only one link of Boudin sausage and three quarter pound of shrimp were used.  Tomato paste and parsley were omitted.  Tony Chachere's was chosen Cajun seasoning.  Did you expect anything different?
Boudin was skillet fried heavily to create a nice crunchy outside casing.  Once cooled, it was sliced into chunks.  To boudin grease, onions, celery, and peppers were cooked until soft.  Remaining instructions were followed and boudin was returned at the same time the shrimp were added.
Scaled for Likability: Good
There is a disconnect in my cooking technique.  I cannot cook rice unless it is by itself.  When cooked in a mixture there is either too much water, not enough water, the rice is overcooked or more likely undercooked, and always takes longer than the suggested cooking time.
Other than the rice giving grief, this Cajun/Creole dish was tasty.  It was not authentic by any means but it was easy.