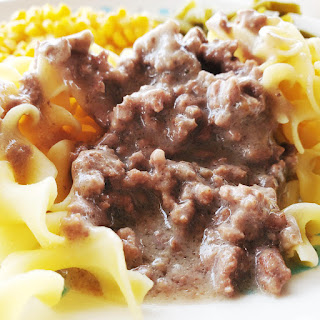 During my middle school years I decided I was too old to ride home with the grandparents so I walked. Being home by 4pm also meant dinner would be ready to eat when my mom arrived home by 6pm. So long late night dinners!

Deciding what to cook for dinner was exciting.  In my rotation of dinners were three standards:  a hamburger frozen veggie pasta and Velveeta dish, spaghetti in many variations, and S.O.S with green beans and field peas served over either egg noodles or biscuits.  The burger Velveeta dish has gone the way side and who doesn't love spaghetti. S.O.S. on the other hand has not be eaten in close to 15 years. This had to be remedied.

Scaled for Likability: Great
S.O.S. is just great.  It is one of the very meals served with cream of soup that I actually eat.  The longer the meat simmers, the better the flavor.  Side served are green beans, field peas, or corn.  When S.O.S. is had as leftovers, just mix all the veggies into the dish and lunch is a one pot full course meal.  It is just great.