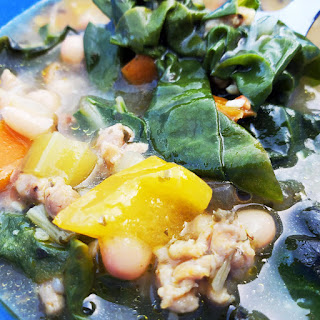 Oh, the heat.  Summer is so hot and there are still three months to go before cooler (highs in the upper 90's) are back.  As the saying goes, if you can't beat them, join them.  And what better way to beat the heat than with a nice bowl of White Bean Chard Soup.
Modifications Made:
Two links Italian sausage
1/2 large yellow onion, diced
2 celery sticks, diced
1 large carrot stick, diced
1/2 orange bell pepper, diced
1/2 yellow bell pepper, diced
Medium bunch of chard, roughly cut
2 T garlic
1 T cilantro
4 cups chicken stock
2 cups water
1 can white beans, drained
Salt & Pepper
Instructions:
In large pot, sausage links were crumbled and well cooked.  To sausage, onion, celery, carrots, bell peppers were cooked for about five minutes.  To veggies, chard, garlic, stock, water, beans, and cilantro were added and cooked until veggies are tender.  Adjust seasonings as needed.
Scaled for Likability: No, Thank You
To my recollection, bell peppers in a soup are never good.  They become soggy and lose their flavor.  This soup was no exception.  Another soggy ingredient was the addition of white beans.  Beans needed to be something more stought, like small kidney beans.  White beans out of the can were almost self-contained paste pods.  Gross.
If made again, or something similar, carrots should replace the peppers and barley could replace the beans.  Instead of broth base, this soup could benefit from a flour based roux or even a splash of cream/whole milk.