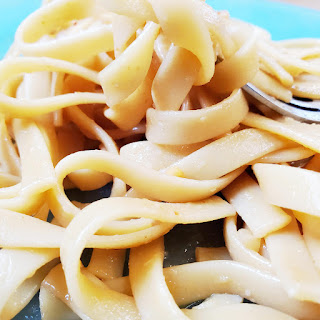 It's late and every one is hungry.  Hangry, even.  Carbs and protein are needed stat. What to eat? What to eat!  Looking through the pantry and not having the energy to make something challenging or time consuming I settled on an Easy Asian Noodles Recipe, a recipe I have been saving for just such an occasion.
Modifications:
The listed sauce ingredients when added together consisted of the same ingredients in a different arrangement as ingredients used in the Sweet Thai Sauce. To make the sauce easier I added equal parts Sweet Thai Sauce to soy sauce to create a mixture of 1/4 cup. To the 1/4 sauce, 1 teaspoon each of sesame oil, ginger powder, chopped garlic, and cornstarch was added and mixed well. Because noodles were being served with a side salad, the topped fried egg was omitted.
Scaled for Likeness: Good
Many months ago a Sesame Garlic Noodle dish was made similar in idea to this recipe. That recipe was only rated at a Good because of my modifications of mixed veggies and chicken. Today no veggies/meat were added and the recipe still only rated at a Good because of the noodles themselves. Whole wheat fettuccine noodles are called for and while regular white flour pasta was used, it was the thickness of the noodle itself that kept this recipe from being great. There was just too much noodle, too much chew, too much pasta to sauce ratio. This recipe definitely needs either angle hair or thin spaghetti as its pasta base.