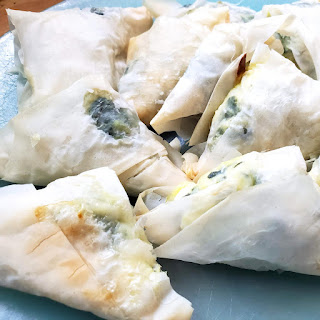 Oh, the debate.  Soda, Pop, Coke they are all the same.  People in the internet land have lost their minds over the debate over Greek Triangles or Samosas.  Too many people getting lost in the details, just rename it already and get on with the more important part, the food itself!  Greek Spanakopita Triangles
Modifications Made:
To one cup feta, two sprigs of chopped green onion, a half cup of chopped frozen spinach, and salt and pepper were mixed well together to form a creamy paste.  Only two sheets per wrap were used and were sprayed with olive oil as a pastry brush is not owned.
Scaled for Likability: Good
Wonderful in flavor, crumbly in texture.  Too crumbly in texture causing the triangles to fall apart while holding.  Not quite large enough for two full bites and too large for one bite, biting into two pieces was disastrous resulting in the need for a fork.
Light yet filling, these triangles were perfect for a lunch treat.  Just not a hot summer lunch as cooking in the oven when it is already in the upper 90's is just too much heat.