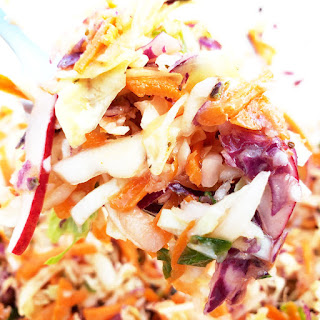 When at the beach there is nothing like a dinner of Panko Shrimp and Vinegar Coleslaw.  Yesterday's less than spectacular fried crab cakes created a need for fabulous fried shrimp.  Sadly, there were not enough okras in the garden for another round of fried okra to accompany fried shrimp.
Modifications Made:
Shrimp: To flour mixture, salt was omitted and one tablespoon of Tony Chachere's was added.  Of course!  Yogurt was added to the egg instead of milk or water as normally used.
Slaw:
White vinegar replaced ACV, dried mustard replaced grainy mustard, and white sugar was used instead of honey.  Dressing was mixed and set aside in the fridge to meld while veggies were shredded in the food processor.  Slaw was tossed and returned to fridge while shrimp were fried.
Scaled for Likability: Great
Shrimp: Great
Panko crumbs are gods gift to cooking.  Before panko crumbs all fried dishes were slightly soggy.  There are always two boxes of panko crumbs in the pantry: plain and garlic.
Slaw: Good
Vinegar based slaw is kinda hard to mess up.  Thinly sliced veggies (cabbage, carrots, raddish, greens, jicama, onion, broccoli, kale, etc...) in a vinegar, sugar, lemon juice, S&P sauce.  Super simple, super tasty.  The mustard was a nice addition as were the celery seeds but the slaw lacked the tang from the lemon juice.
Next time I am going all out for fried shrimp, fried okra, hushpuppies and an ice cold glass of tea. Delish.