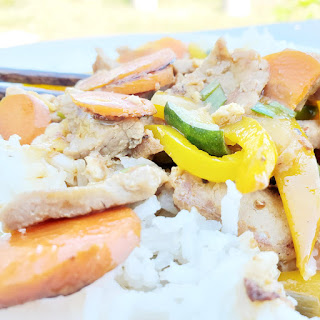 Stir fry is the best way to use leftover veggies. And while is the normal for most stir fry meals served at this table, Hunan Beef was planned and ingredients were bought with specific intention.
Modifications Made:
Yellow bell pepper replaced red bell pepper and frozen zucchini replaced fresh.  Ginger was omitted and powder ginger was added to the sauce instead.
Scaled for Likability: Great
This is the first Asian recipe where White Ground Pepper was called for and used.  Never has a bottle of ground white pepper been owned and when compared to black pepper there are definite noticable differences.
It seems all Asian sauces contain some sugar but the amount of sugar in this dish is lost to the heat of the Sambal Oelek and white pepper.  The only thing to make this dish better would have been the use of fresh zucchini as stated or the addition of snap or snow peas instead of zucchini.  I am finding the more I cook with zucchini, the less I like it.  Odd.  Next time, the sauce is going to be doubled and noodles are going to be swapped for rice to see how the Hunan Beef Lo Mein compares.