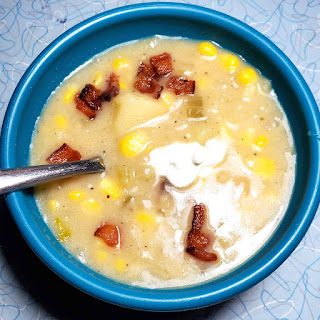 Last week's Peppery Potato Soup left me wanting another non-traditional potato soup.  Corn and celery in Potato Corn Chowder were just the ingredients for a non-traditional potato soup winner.
Modifications Made:
Bacon was doubled, because um hello, bacon.  Once celery and onion were softened, two tablespoons of flour were added and quickly browned for extra flavor, before chicken stock was added.  Pepper was doubled and milk was omitted.
Scaled for Likability: Great
Now, this was what I was looking for in a non-traditional potato soup.  It would have absolutely blissful with added milk or cream as the recipe listed.  Flour did allow the soup to thicken but flour does not add that creamy taste.
Oh, the chew of celery, the sweet corn, the salty bacon, and the peppery potato.  When topprf with a tablespoon of sour cream (not shown as I was the only one who added it) this soup was just perfect.  Perfect.