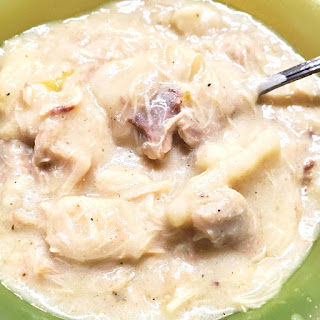 Last week while visiting family for a Covid Xmas, homemade chicken and dumplings were requested.  When I showed the pictures of Grandma's Chicken and Dumplings made last December a piece of the missing puzzle was found.  Grandma's chicken and dumplings were thicker in stock, less soup broth, more dumpling starch.  Well, hot dog!  Let me make them right now.  Luckily said family member always has several family packs of chicken thighs in the freezer.  So with eight chicken thighs, I set to the task of creating a thick stock based chicken and dumpling.
Modifications Made:
Following Grandma's Chicken and Dumpling recipe, the dumplings were liberally, as in one cannot have too much, coated in flour.  After all dumplings were added to pot, the thickness was assessed.  Two tablespoons of water mixed in half cup was water was added.  Ten minutes were allowed to pass and thickness was assessed again.  This time, two tablespoons of flour were mixed in half cup low fat milk and then added.  Ten minutes more were allowed to pass and a final two tablespoons of flour mixed with half cup of water was added.  Once the dumplings were done, the pot was covered and set to rest for an hour before served.  This allowed the flour to lose its floury taste, the gravy to thicken even more, and the dumplings to cool down to an edible temperature.
Scaled for Likability: Great
These were good, really really good the day they were served.  They were absolutely perfect the next day.  Sure reheating on the stove took some time and patience so the bottom did not burn but man was it worth it.  This is what everybody remembered grandma's chicken and dumplings tasting like.  It was the thick rib sticking gravy that did the trick.