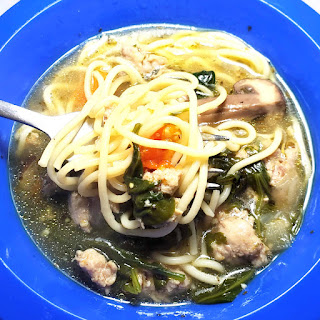 It started as Spicy Pork Mustard Green Soup and then added Italian Wedding Soup to create something not either.  Created something tasty, filling, and simple.
Modifications Made:
One box plain-o jane-o spaghetti noodles cooked to al dente and set aside.
One pound ground pork browned, set aside to drain.  To pork fat, one small, finely diced white onion and one container quartered white mushrooms sauteed till translucent and tender.  Two tablespoons minced garlic, four cubes chicken bouillon cubes, eight cups water, one pint halved sun gold tomatoes, one teaspoon red pepper flakes, one tablespoon soy sauce, and drained pork were added and simmered on low for 20 minutes.  Half bag of frozen chard was added and simmered until tender.
Noodles were not added to the soup, instead placed in bowl and soup ladled over.  This keeps the noodles from becoming mushy (yuk) and brings down the temperature of the soup to something more consumable (yummy).
Scaled for Likability: Great
So many different flavors and textures combined to create a soul warming soup.  Yes, the soup would have been much better with smaller thin pastas like the beady pasta shown in the Italian Wedding Soup blog but spaghetti was better than thick rotini or spirals.  Orzo pasta would have been a great substitute as would a mixed grain mix like this or even this.
Next time, soy sauce will be doubled, a shot of fish sauce will be added, and ground pork will be swapped for a blend of sweet and hot pork sausage.
Edit Jan 1, 2021:
Once the soup was cooled, leftover pasta was added.  As with all soups, this tasted even better the next day for lunch.  Noodles did not become soggy as they were served al dente to start.  Having not enough soup for three, garlic breadsticks were served alongside and offered a much needed filler to soak up leftover broth.  Breadsticks, not toast.