Roasted Asparagus and Squash with Cranberry and Pecans 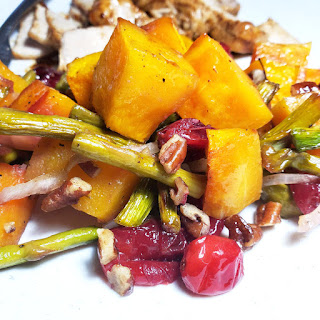 Oh, my cranberries.  Another tasty recipe containing fresh cranberries has been discovered.  With a bag in the fridge waiting for its debut dinner, Cranberry Pecan Roasted Vegetables was immediately planned for dinner today!
Modifications Made:
Holidays bring out the crazy, even to those who don't celebrate.  Went to the local grocer this morning to find a dozen or so customers milling about in the produce trying to form a picketing plan over the unstocked bins.  I understand, really.  There was no pre-packaged carrots/broccoli/green beans/snap peas/cauliflower, no cilantro/parsley/green onions, no celery/leeks/napa cabbage, and no brussel sprouts.  Chill, people. Human beings are the most adaptable species on the planet.  What did they did have, however, was some of the freshest, most tender asparagus bunches at $0.97.  As compared to brussel sprouts at $3.47/bag, asparagus was a more economic and tasty anyways.
To a large bowl, one bunch of asparagus cut into 1" chunks, half of a butternut squash diced into 1" chunks, half of a small red onion sliced thin, and half a bag of fresh cranberries were tossed with salt, pepper, and vegetable oil.  Upon thoroughly mixing, the vegetables were spread out on a 12" cast iron skillet and roasted at 400 degrees for about 45 minutes at which a half cup of diced pecans were tossed on top of the vegetables and vegetables were cooked until squash was fork tender.
Scaled for Likability: Great
There are only two modifications to be made the next time this side dish is made.  One, more of it as in double the amount.  With limited oven space, the quantities prepared were not enough for three people without a meat and pasta side. Second, and I hate to say this, a reduction in fresh cranberries.  Their tanginess overpowered the gentle butternut squash/asparagus combo.  Had the dish used brussel sprouts as directed, then the cranberries would have been a perfect match.  Otherwise, no further modifications would be made to this beautiful to look at and beautiful to eat healthy dish.