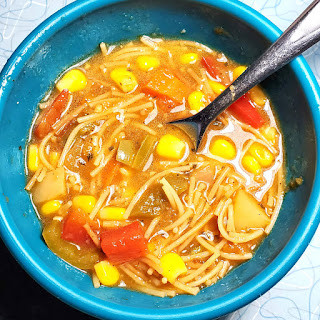 Visiting family always result in the same meals.  Meats, meats, meats. Never could something a simple and healthy such as Sopa de Fideo con Pollo be served.  No matter how fabulous.
Modifications Made:
NO MEAT.  Not chicken, not beef, not ground, not sausage.  NONE.
Brown fideo, remove and set aside.  To same skillet, brown onions and potatoes until just fork tender, add bell peppers, carrots, and garlic, half cup fresh small diced zucchini, and half cup corn.
In a blender, puree one cup zucc with half cup homemade salsa and one cup water.  To mixture, add one pollo de tomate bouillon cube, one tablespoon of chili powder, one teaspoon of comino.  Blend and add to veggies in skillet, cook until zucchini is soft.
Return fideo, adjust water, and cook till desired tenderness.
Scaled for Likability: Great
Another meal proving meats are not always needed.  Fideo soup was tasty, filling, and loaded with colorful veggies.  Served with a side on buttery corn tortillas and all tastebuds were satisfied.