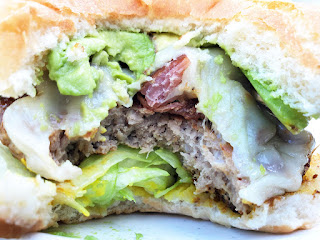 Going on more than three months into this here pandemic and not being able to have my favorite fast food burgers, I have discovered I no longer crave the bad for the heart/cholesterol/weight fried, salty vice. Crave, as in wanting it and eating it every day.  Seriously, six days out of seven. If a burger could be had once or twice a month, that would be okay with me.
Not having the local fast food chain's Avocado Bacon Burger doesn't mean one can't be made at home where it has to be slightly more healthy than the one purchased. Just eliminating their fantastic fries and spicy mustard already makes my burger more healthy.
Modifications Made:
The local joint makes their burger on buttered and grilled Texas toast, with American cheese, a quarter pound 100% beef patty (so they say), using the thinest bacon and avocado slices known to mankind, topped with a creamy pepper sauce, tomatoes, and onions.
This table made their burger on a standard run of the mill unbuttered or un-grilled hamburger bun, with Swiss instead of American, third pound turkey patty instead of beef quarter, thick pepper bacon and slightly smashed avocado, mustard instead of creamy pepper sauce, and lettuce instead of tomatoes and onions.
Scaled for Likability: Good
They were not my beloved Avocado Bacon Burger from the local food joint but they were just as ridiculously messy to eat and plenty tasty.
Use of Texas toast as it turns out is key to the burger along with the creamy pepper sauce.  Gonna have to do some research into the sauce as I am sure it mayo based. The mustard was good but the creamy pepper would accent the cheese better. Provolone would have been just as good as either Swiss or American but not Cheddar or Havarti. If Cheddar was used, the mustard would be kept. The best addition was the lettuce as it gave the whole burger a nice crunch layer. Iceberg lettuce leaves were used but butter, arugula, or shredded iceberg would have been better. Swapping turkey for beef was undetectable with all the flavor layers.
Lots of room for improvement. Since there is no end of this pandemic in sight, there will be lots of time to master the Avocado Bacon Burkey Turgers (Turkey Burgers).