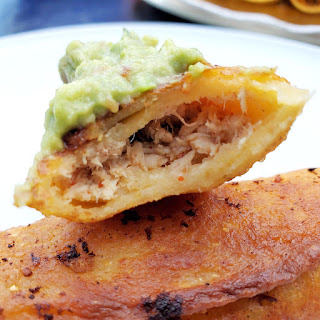 Last night's Chicken Breast Green Enchiladas may not have been the best enchilada ever and while none of us were looking forward to another night of dry tough chicken, something had to be done with the remaining two cups or so of meat. Thinking the dry meat would be less noticeable in a taquito, Green Chicken Taquitos were served up tonight.
Modifications Made:
Using the procedure from Chicken Taquitos, the only thing changed was the meat filling.
Leftover chicken breast meat was slowly simmered in a pot with just over a half cup of salsa verde. My thinking for this was 1) to create the green salsa verde flavor and 2) to offer some moisture into the meat itself.
Scaled for Likability: Good
Not so much. Don't get me wrong, the almost perfectly rolled and fried taquito was crunchy on the inside and filled with warm meat on the inside. It looked and tasted like the perfect taquito, if I was aiming for just a chicken taquito that is.
I wasn't aiming for a perfect chicken taquito, I was aiming for was a green chicken taquito. These taquitos were lacking the quintessential green salsa flavor. Yes, the taquito could have been dipped into a salsa verde cilantro dip but as mentioned in yesterday's post, there was no fresh cilantro. And not one for dipping taquitos, I wanted the flavor to come from within the taquito itself, literally.
All was not lost. They were tasty all the same and frying them meat removes some of the dryness of the chicken. If the meat was still tough it unnoticeable over the chew of the tortilla itself. If cooked again, chicken breasts would be boiled in a green chili infused water bath and then cooked down in a jar of green salsa verde.