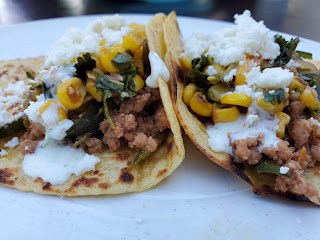 Every now and then immediately upon reading a recipe or watching a food video I know immediately the recipe will be an instant winner.  One after a few tweaks and alterations it will fit perfectly into the T&T collection. One such example, Corn Chimichurri Pork Tacos.
Modifications Made:
Corn: as it is not really fresh corn season, frozen was substituted in equal proportions. Concerned about scorching garlic, only minced garlic liquid was used in amounts double to original amount of fresh diced garlic.
Creme: one teaspoon of garlic liquid was added.
Pork: tomate sauce replace tomato paste, one cube Pollo de Tomate and half cup of water replaced chicken broth. Pork was allowed to simmer for a minimum of 45 minutes while creme and corn were made.
Calling for either corn or flour tortillas, tacos were corn/flour mix tortillas. Corn to accent the coen chimichurri, flour to offer the chew and were grilled over an open flame to allow edges to crisp yet retain a soft center.
Scaled for Likability: Great
Words can limiting. Great does not fully express the instant love for this dish. The pork, the corn, the sauce! All could have been eaten by themselves with spoon. Wait, they were eaten by themselves several times with a fork, a spoon, and just the fingers. This was one of those dishes where the eyes and mouth want more and more and more resulting in a too tight stomach. Worth every bit of tight pants and content smiling.
Edit June 15, 2020:
Leftovers were great.  Pork was even tastier, the corn was warmed in the microwave and then briefly recharred on a very hot, hot skillet to obtain the nice crunchy layer, and the creme was even zestier. Fearing the creme was going to turn liquid, I was prepared to add a teaspoon of flour to thicken. However, the creme was more intense in flavor but did require a tad bit more salt to even out the flavors.