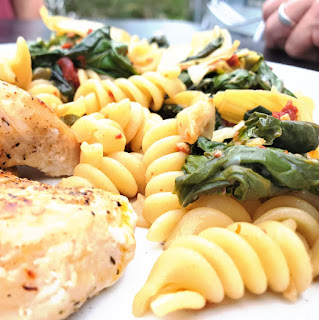 Do you love sundried tomatoes?  This table has a love hate relationship with them as I have mentioned before in Sun-Dried Tomato Alfredo with Mustard Greens.  With a half jar of sun-dried tomatoes left in the fridge, another go was given with Fusilli with Spinach, Artichokes, Sun-Dried Tomatoes.
Modifications Made:
One box of well salted spiral pasta was used instead of 8 ounces.  Sauce was heavily modified to offset additional noodles.  Sauce contained: three tablespoons of EVOO, four teaspoons of minced garlic, half jar of sun-dried tomatoes (drained), one can of drained and quartered artichoke hearts, half jar of capers, and one large handful of fresh and diced swiss chard leaves.  Pine nuts were omitted as they hard to find locally.
Cooking instructions were followed as written.
Scaled for Likability: Good
Success, a sun-dried tomato recipe where everyone ate without complaint.  I credit this to the fact a ration of one pound box of noodles to half jar of sun-dried tomatoes.  Add in the full flavor of the capers and the texture of the chard, the tomatoes almost get lost in the recipe.  Pine nuts were not missed nor was their texture.
Next time, red pepper flakes and a dash of nutmeg will be added along with shredded parm directly before serving.  Recipe would be great with chard, kale, or spinach and is equally good warm or cold.  Love a versatile dish.