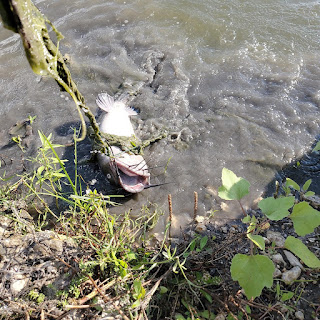 What's for dinner tonight?  Jaws.  Otherwise known as kittyfish, yella cats, bluecats, flathead, channel, rivercats, tankcats, mudcats, whatever cats your local vernacular calls them .  These were none of the above, these were two old catfish.  And unlike fried fried fish and yams at Spring Break, these were part of a true fish fry special.  Fried fish and french fries.  Nothing more, nothing less.
Modifications Made:
Normally fried catfish is served in strips about an inch thick.  Knowing ahead these fish were old, the fish were cut into thinner strips and marinaded in beer batter before deep frying.
Scaled for Likability: Fail
Seriously, I have eaten shoe leather more tender than these two jerky catfish.  When cleaned and prepared correctly with all bits of skin and gray removed, fried catfish is good eats.  Over the years fried fish has been consumed from cats that were double and triple the size of "Jaws".  Literally, these fish were hung from the branch of a tree to be skinned they were so big.  Those fish were cleaned, prepared correctly, and fried morsels were fought over when the last round was made.  Two old catfish on the other hand...
The table counterparts struggled through but I ate fries.  Lots and lots of fries.  Good thing there was a fresh 10 lb of potatoes to make all the fries I wanted.