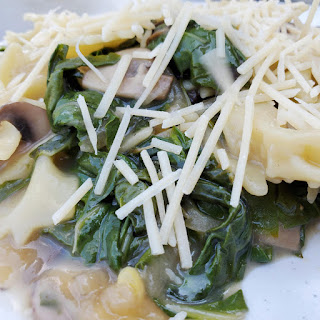 Photography is an art.  Food photography is an art form I lack, mostly because I just won't devote any energy to learn.  When your income is based upon your photos such as so many food blogs/video feeds are, photography is critical.  The lighting on the second picture in Farfalle with Spinach Mushrooms and Caramelized Onions that hooked me.  Never have I seen such beautiful caramelized onions.  These were golden brown while still holding some shape not almost burnt and limp.  Even if nothing more than cooking the onions was the goal, this recipe had to be attempted.
Modifications Made:
In a large cast iron skillet, one and half yellow onions were "caramelized instead of three.  Red wine vinegar was used to deglaze the skillet before white mushrooms and chard were cooked and set aside with onions.  To help make a creamy sauce without all the milk or half and half, one quarter cup of flour was browned in one tablespoon of butter.  Flour was browned until just off of white coloring.  One cup of milk was added slowly to flour, whisking constantly.  Half of cup of water was then added along with a dash of salt and pepper and vegetables.  Mixture was allowed to simmer on low for 20  minutes, checking for salt and pepper and sauce consistency.  During this time, the noodles were cooked to al dente, added to sauce mixture, simmered for 5 minutes.  Parmesan cheese was not added into cream mixture but reserved for fresh topping.
Scaled for Likability: Good
Not creamy enough.  The sauce was too runny for this tables preference.  We like pasta sauce to stick to the noodles instead of forming puddles on the plate.  The use of flour/ milk was a good combination as the sauce did not taste milky or floury.  As for the caramelized onions, well mine did not ever reach the color of caramel but they did taste great.
If this meal is made again, each ingredient layer will be cooked as if eaten separately so when combined to simmer the flavor depth will be higher.  Liking the cream based sauce, the same process could have been achieved with chicken broth and flour instead of milk adding yet another depth layer.  The sauce was simple in flavor and could use some flavor boosts from garlic, more salt, a heavy dash of pepper, and a pinch of nutmeg.  Having meals where there are lots of room for improvements means this meal can easily be improved to suit table preferences.