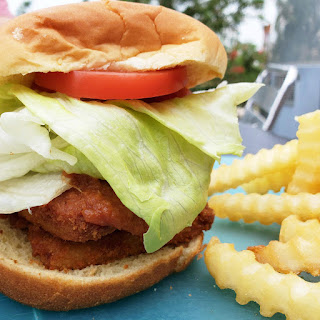 Eating Gourmet Breakfast Jacks a couple of weeks made me think of other simple fast food meals that could be gourmeted up like the fish sandwich from Wendy's.
Modifications Made:
Instead of one single layer of fish, a double stack of Gorton's extra crunchy deep fried cod fillet was served along with a slice of tomato for the table counterparts and all placed on a potato bun.  On the side were Ore-Ida crinkle cut fries instead of thin fry sticks.
Scaled for Likability: Great
Much to my dismay, Wendy's fish sandwich is everything a fish sandwich should be.  If you don't believe me you can read this article comparing eight fast food fish sandwiches.  Not even the double stack fish fillet made an improvement to the sandwich.  In fact, I would say the only improvement made to the sandwich was the fact that it was made and served fresher than a fast food joint.