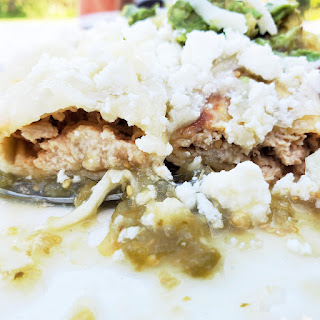 Going to the store these days is a trip.  Not a road trip with lovely sights to see but a trip into downtown traffic on a rainy day at Friday rush hour.  Over the past few months I have learned just to roll with the trip.  Make no plans, no time allotment, no destination.  Then and only then does traversing the grocery store become manageable.

Take yesterday's trip.  The general trip was to get all the items needed to make Green Chicken Enchiladas, A Staple.  Basing upon the last several weeks worth of trips, this should have been an easy trip.  But as you can imagine, it was not.  To start there was not any fresh cilantro, not a big deal as I have dried.  Then there was not any sour cream, also not a deal breaker as it only used as a topping and can be substituted with Mexican crema which they did not have either.  Yet, still not a deal breaker.  The real kicker to the trip was the lack of whole chickens.  The local grocer sells four brands of whole chickens and there was not one to be found.  Not even a non-GMO, certified, $7.99 a pound organic chickenlet.  Chickenlet as these chickens are only about two pounds max, less than half of the standard whole chicken currently.  What they did have was a package of four bone in breasts each larger than my hand.  Seriously, chicken breasts larger than what was removed from my BBQ Turkey last year.  Well, want in one hand, get in the other.  At least they had chicken, right?  Luckily they had my beloved Herdez Salsa Verde and cheeses.

Modification Made:
Following the same procedure for staple chicken cooking, the breasts were boiled with just enough water to cover along with an small finely diced yellow onion, a whole jalapeno cut in half, tablespoon of dried cilantro, a tablespoon of chili powder, a teaspoon of comino, and a Knorr Tomate de Pollo cube.

Once chicken cooked, it was deboned and added back to the stock to allow simmering until stock cooked away.  Seasonings were tasted and adjusted.

Enchiladas were rolled, covered with salsa verde and Monterey Jack cheese, and popped in the microwave until the cheese melted.  Queso Fresco was crumbled a top along with a dollop of guacamole and a spoonful of homemade red salsa.  Dinner served.

Scaled for Likability: Good
I am blaming this not failed dinner but not winner dinner either on the chicken manufacturers.  Chicken breast the size of large adult male hand is going to be nothing but manipulation and water injection.  Breast meat was dry, tough, and stringy.  All the elements of old yard bird hens not cage confined raised chickens picked at their "prime".

So sad.  All I wanted was homemade comforting Chicken Enchiladas.