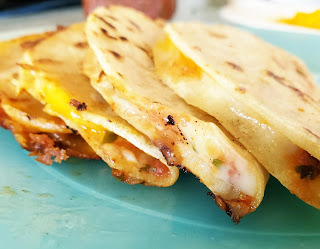 In the Spring of every year my hometown holds a four night festival of cultures celebrating its diversity in 200 different food and drinks reflecting fifteen different cultures.  Every year my family would attend and every year I would only request two items: Cowpokes (a round corn tortilla chip, a round white cheese, one canned jalapeno slice, one smaller yellow cheese circle all cooked in a large cattle style oven pit over a pit of coals served hot and but not melted so the chip cheese mixture remained in the shape and look of an egg) and Maria's Tortillas.  Lots and lots of Maria's Tortillas.  Neither are nothing fancy but neither were ever made a home.  And even though they could have been, the festival flavor and experience would be lacking.

As I grew into my late teens, I know longer attended this festival due to various reasons so Maria's Tortillas had to be created at home.  After many, many, many attempts, they were mastered and have become a monthly staple for a late night snack, a quick lunch, or an easy dinner with a side salad.

Think a quesadilla but with cheese and salsa only and on a corn tortilla. Cheese and salsa oil cook into the tortilla resulting in a beautiful outside crispy layer to a soft inside.  It is almost as if the crunch keeps the moist in.  So good.

The key to a great Maria's Tortilla is to practice the motto less is more. Less cheese, less salsa.  Just enough to fill the center of half the tortilla and squish out the ends when grilled.  On a standard 8" corn tortilla, there is less than a tablespoon of cheese and a teaspoon of salsa. Heat needs to be high enough to sear the oil/cheesy/tortilla but so hot as it burns the tortilla. It really is a practice makes perfect situation. Being as each table counterpart eats a dozen or so each, practice comes easily.