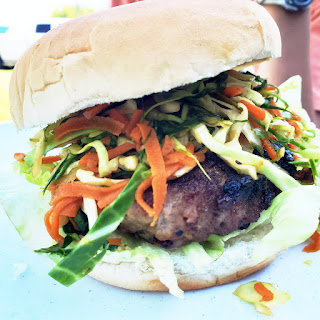 Not since Pepper Jacked Chicken Burgers has a non-traditional burger been great.  Asian-Style Pork Burgers were given a test tonight because for no other reason than it allowed another opportunity to use Sweet Chili Sauce.
Modifications Made:
Okay, chili sauce was really not part of the original recipe but nothing stated it would be a terrible substitute either.
Patties: To a one pound ground pork, one tablespoon of chili sauce and one teaspoon of soy sauce was mixed and three third pound patties were formed.
Slaw: One cup green cabbage and two cups carrots, shredded and three diced green onions were mixed by hand in a bowl. To vegetables, one tablespoon of soy, two teaspoons mirin, one teaspoon white vinegar, and one teaspoon of chili sauce were added and allowed to meld/soften for 30 minutes.
Scaled for Likability: Good
Of all the slaw type burgers attempted, this has been my favorite so far as it was sweet, salty, and vinegar based.  Much like my favorite slaw from a local BBQ joint.  Patties were moist from the mixture but needed extra heat in the form of white pepper. Red pepper might have worked but the white pepper offers heat in subtle fashion.
Overall, the flavors were similar to potstickers, even without the mushrooms.  To make a better burger, next time the patties would have been flavored with soy, ginger, sesame, and white pepper only, the slaw would have just been sweet chili sauce with vinegar, and the two would have been sandwiched between a well toasted sesame seed bun.