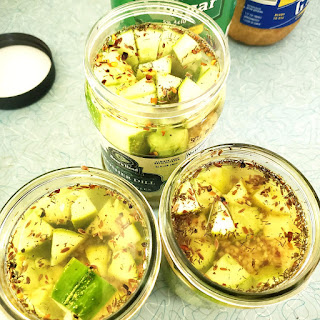 Last month, Refrigerator Pickled Vegetables were my first attempt at refrigerator pickles.  Notice I said first attempt.  Made and stored in the back of the fridge for five long weeks, last week the pickles were cracked open and promptly thrown into the compost bins.  They were all sorts of wrong.  Not crunchy, too salty, overpowered by apple cider vinegar, and tasted off.  Can't say if it was the seasoning mix or if they went funky on their own.  Complete loss.
Luckily for me there is a garden full of cucumbers to try again.  This time Garlic Dill Refrigerator Pickles were made instead with a few alterations, of course.
Modifications Made:
First and foremost, plain distilled white vinegar was substituted for ACV.  Mom didn't use ACV and neither did I when making canned pickles.  If one reads the back of major store bought refrigerated pickles, they don't use ACV either. A teaspoon of minced garlic per jar replaced whole garlic, pickling spice replaced black peppercorns, the third jar was half filled with small okras, and red pepper was omitted.
Already these pickles smell better than the first batch.  I really do think it was the ACV that was displeasing on the first batch.  The only way to tell is to wait..... 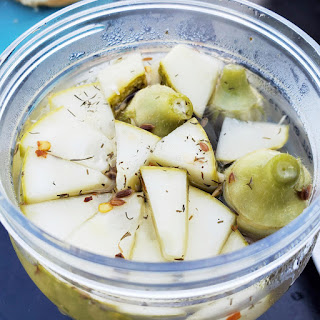 Update July 21, 2020
Forty-eight hours was all the recipe said the pickles had to set in the brine before they were ready to eat.  Fourteen days later was the first time a dish was prepared where a homemade pickle could accompany.  Fourteen days worth the wait.
Were these name brand cold pack pickles.  No.  Were these good enough to be made again.  Yes.  Especially the okra.  Pickles on the other hand may not be made with the correct cucumbers as these were too fleshy and tough skinned.  Cucumbers need to be smaller, maybe even whole, and picked younger before the skin gets hard.  Next summer.  This leaves me plenty of time to research different cucumbers, more importantly, cucumbers that will tolerant hot salt air.