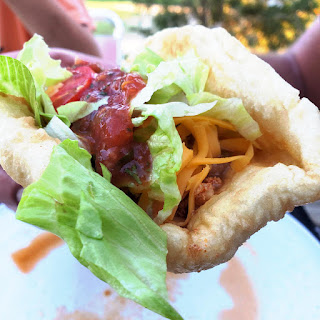 Having fulfilled my obligatory meatless meals for breakfast/lunch yesterday/today and dinner yesterday, today a meat meal was served.  Not a lot of meat, just a tablespoon per serving of meat.  The meal could have been served meatless but the pictures of Indian Fry Bread were so beautiful with its moist bits of meat, meat had to be served.
Modifications Made:
Wait for it.  Nothing.  Not one single modification was made to the fry bread recipe.  In fact the only modification made from the original picture to my own version was the swapping of tomatoes for my homemade salsa.  Had a picture of the table counterparts been taken instead of the teens, it would have looked exactly like the pictures: bread, whole beans, meat, lettuce, cheese, tomatoes.
Scaled for Likability: Great
Not really a flour tortilla, not really a chalupa. Not really a puffy taco, not really a pita bread.  This fry bread is a category all of its own.  They are made the same as tortillas (subbing water for milk) and are deep fried not cooked.  They puff like a puffy taco in texture but not made with masa.  They have a slight crunch like a chalupa but a soft and pillowy like a good flour tortilla.
Next time these are made, the recipe will be doubled so extras can be served warm with honey like a sopapilla.  I would also like to serve these with the ingredients in green chicken enchilada then topped with white cheese, lettuce, and salsa toppings.  Not excessively time consuming to make, just messy.  Sometimes in life, all the good things are messy.