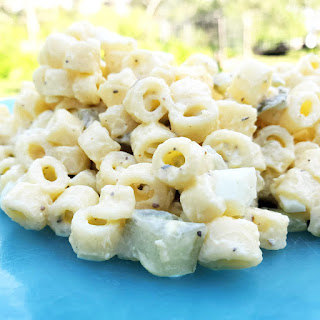 With exception to Thanksgiving and Christmas, if there was a event requiring my mother to bring a food dish she was bringing macaroni salad.  It was always requested by those hold the food event and if they were concerned she would bring anything but the salad they would sheepishly request it. Like that was ever an option. The salad was easy enough to make for one person, ten persons, or a hundred persons.  And yes, there was once a summer family reunion with over a hundred people and my mom made bowls and bowls of her salad.  It was actually one of the few times she could play with variations and get feedback.
Ingredients:
16 oz Ditali noodles, cooked in heavily salted water to al dente
10 hard boiled eggs, diced
1 cup hamburger pickles, diced
1 Tablespoon finely yellow diced onion
1 tablespoon Nature Seasoning
1 teaspoon ground yellow mustard
1.5 cup Miracle Whip
Instructions:
To a large bowl, mix whisk pickles, onion, seasoning, mustard, and mayo. To sauce mix in well drained noodles.  Allow noodle mixture to chill over night.
Scaled for Likability: Great
Because I am an adult, I no longer eat Mom's Magnificent Macaroni Salad by itself straight from the bowl in the fridge. I tell myself I need to be more healthy and serve macaroni salad with a side of greens. One cup (no, I lie its more like two cups) of salad served over a bed of arugula is absolutely wonderful. The bitter of the greens balances the sweet from the mayo, pickles offer a lovely crunch, the greens the color, and macaroni the happiness.
Lasting two or three days in the fridge, Mom's salad can be served with all things summer: hot dogs, burgers, sausage either cooked on the pit or boiled, any and all BBQ meats (is especially tasty when paired with sweet sauce BBQ instead of spicy), and of course fried fish.  Nothing says summer better than Mom's Magnificent Macaroni Salad!