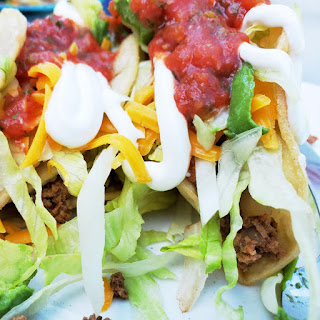 Crispies, so crunchy on the outside
Filled with good stuff on the inside
Sung to the opening lines of Andrew Lloyd Webber "Memory"
Have you ever wondered how traditions get started?  Does someone set out to start it, intentionally so to say.  Or are traditions organic?  They just happen on their on own and one day in the future someone will label it a tradition?  I do not feel like singing Crispies at the top of my lungs was intentionally set out.  It just happened.  And it happens every time crispy tacos are served or mentioned for serving, much to the dismay of the table counterparts.  Of course, to be fair to them, one was "tortured" and the other has never seen The Phantom of the Opera unlike myself who has seen it three times and am waiting for the next North American Tour.
Anyways...Crispies....
Turns out they are not as easy as 1,2,3 but oh my they are better 10 times over than any store bought version.  There are a dozen ways to make crispies but fried in a skillet in a thin layer of vegetable oil with a long handled thong is the way to go.  Just like in this video How to Fry a Taco Shell.
Modifications Made:
Salt.  As soon as the taco shells come out of the oil, a sprinkling of salt was tossed on the inside and outside and end side up to allow the excess oil to drain.
Scaled for Likability: Great
If you have every had a homemade crispy taco shell then you know what true love is.  And just like love, there are no words to describe your emotions.  Except maybe the sound of crunch, crunch, crunch....
The next time homemade crispies are made more salt on the shell is needed.  Otherwise, there is nothing to change just experience to make wider shells for more good stuff.  Practice makes perfect-ish shells.  Yum!