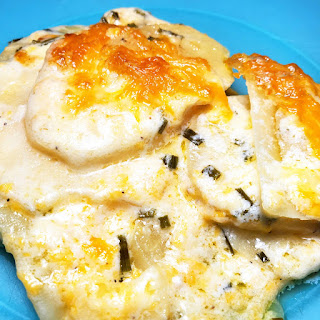 Can't believe the Month of the Potato is over.  There are so many more potato recipes saved.  Guess I will have to work them into another month.

Last week's scalloped potatoes were one of the best new recipes during the month of potatoes.  With today being the last day in the Month of Potatoes, I decided to go out with a bang by cooking another batch of scalloped potatoes but this time sour cream and chive.  The Best Scalloped Potatoes, or so they said.

Modifications Made:
Recipe was reduced by half.  Mayo was omitted and one entire package of chives were chopped and added to sauce before pouring onto layers.

Scaled for Likability: Good
Betty Crocker Sour Cream and Chive Box Scalloped Potatoes were the standard for this recipe.  These were a family favorite for years but have long since been discounted.  Bummer.  Trying to replicate this seemed easy enough.  Alas, it was not.

These had a nice texture but were too oily from the cheese and did not contain enough onion, garlic, and chive flavor.  In fact, I think the a mild cheddar cheese could have been delegated to just the top layer for a some color.  Will keep looking for another version.