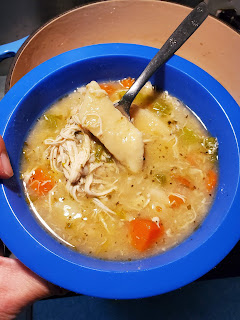 Here are the end of the year and winter is still amiss.  Tonight after weeks and weeks of waiting for blistery cold days to appear, Old Fashion Chicken and Dumplings were served.  Let me tell you the wait was highly rewarded....
Modifications Made:
With most recipes, chicken shortcuts are omitted for a whole, fresh chicken boiled with accompanying seasonings to enhance recipe flavorings.  This trend to use pre-cooked chicken, just breasts, or left over rotisserie is not something I understand.  Especially on a recipe where the broth is KEY ingredient.  Tonight however, I am using the 1 quart bag of leftover chicken and veggies filling from the Barely There Chicken Stew meaning I do not have homemade broth and have to settle for five Knorr chicken cubes to create 40 oz of broth.
According to the recipe, the dumplings were to be rolled into 1/4" thickness and then cooked in the broth.  On the initial test run of dumpling tasting, 1/4"dumplings were too thick and not like Grandma's dumplings so another test was done at 1/8" thickness. Finding this thinness of dumpling to be reminiscent of Grandma's, the rest of the dumplings were cooked till they floated.  The bag of chicken and veggies which had been resting on the counter during the entire dumpling process to remove the chill of the refrigerator was added to the cooked dumpling broth and quickly brought up to edible temperature in just a few quick turns of the spoon.
Scaled for Likability: Great
Grandma's recipe seems, like so many other things, lost to time.  Grandma knows she used some variant of Betty Crocker's chicken and dumpling or the local township 100 year recipe collection simply because those were the ONLY two cookbooks she owned.  For weeks grandma and I searched the internet but to no avail nothing seemed exactly right.  This version was close but it was missing the handwritten notes on special tricks....
While I do know Grandma's recipe did follow more closely to the Old Fashion version with no carrots and celery, the addition was not bad.  No, this recipe was not Grandma's family heirloom version but it was good.  When made again I would absolutely make it without carrots and celery and it would still be good.  I would just add celery, carrots, onion, and garlic to the chicken as it was boiled.  You know, essence and all that.