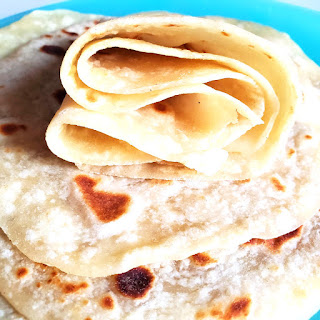 I'm on a quest for the best homemade tortillas. Softest White Flour Tortillas made with lard, yes lard, not shortening or butter or oil.
Modifications Made:
2 cups flour
1/4 cup potato flakes
3/4 tsp salt
4 tablespoons lard, not butter
1/2 cup+ 1% milk, warm, not water
To a stand mixer, flour, flakes and salt were combined.  Lard was added until fully incorporated.  Warm milk was added and allowed to mix for three to five minutes.  Dough rested for one hour before rolled.
Scaled for Likability: Great
These by far are the best tortillas to date.  They have chew without being chewy, they have spring but still tearable, and they have a great flavor without being overly oily.
Next time, additional salt and lard will be added.