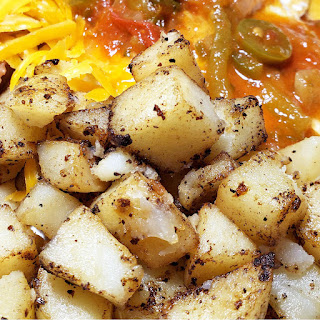 Mexican food breakfast plates come with your choice of eggs, refried beans, and papas .  If having a taco with potatoes (like my favorite bean and cheese with papas), the potato is fried papa style before adding to the taco stuffing.  Some restaurants deep fry the potato cubes, then pan fry.  Some just deep fry.  Some just pan fry.  All methods require two things, lots of oil and evenly diced potatoes.  After that, the sky is the limit.  Any of the three cookings options are fine by this table as long as the potato is just barley crispy on the outside and soft and tender on the inside.

Scaled for Likability: Great
It is best to make these in smaller batches than to over load the skillet as you need room to toss the cubes around.  I prefer bacon grease but have used plain vegetable oil numerous times.  Bacon grease just adds a nice flavor.

When making, it is best to make extra since the skillet is already hot as leftover papas are perfect fillers for both breakfast tacos (potatoes and eggs) or meat tacos (picadillo).  Or they are even better when covered with sharp cheddar cheese and loaded up with salsa, sour cream, and guacamole!