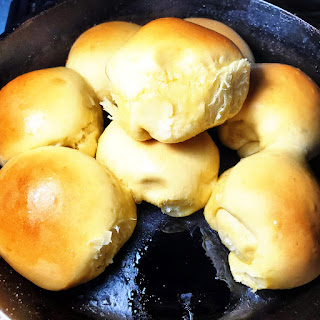 Nothing says love like homemade dinner rolls.  Especially when they are Soft & Fluffy One Hour Dinner Rolls.  And really, if they failed it only just an hour or so wasted, not half the day.
Modifications Made:
None.  Maybe one day when I am more comfortable with all things yeast I will chance some changes.  Until then, stick to the letter...
Scaled for Likability: Great
Oh, the flavor, the butter, the texture, the butter, the softness, the butter, the airiness, the butter.  Did I mention the butter.  You can literally see the butter in the bottom of the cast iron skillet.  Once all rolls were consumed, there was not a drop of butter left.
The recipe states 12 rolls but I miss counted and only made eight. They would be have been better as 12 rolls but they were still amazing as eight.  Twelve would have offered an even more fluffy roll instead these were slightly heavier than desired.  Yet no one complained.  Until desert that is... Three people, eight rolls, somebody missed out on cranberry rolls.  So sad for them.