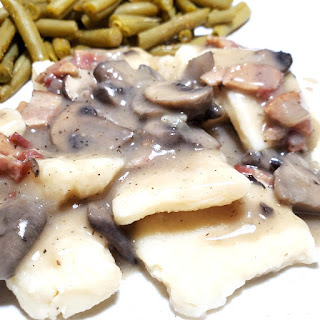 Over the holidays while visiting family, I spent some time flipping through dozens of 60+ year old cookbooks some in English, some in German (not that I read German). In those cookbooks were many recipes for potato dumplings served in a gravy, in soup, served over kraut, stuffed, and even pan fried. Storing the idea for later usage, I forgot to snap a couple of pictures of the recipes. Luckily the base dumpling was all about the same: mashed potato, egg, flour, salt and pepper. It was the cooking process that varied. Wanting to start off easily, Polish Potato Dumplings were the base for tonight's dinner.
Modifications Made:
Not having the time to make real mashed potatoes, two cups instant were used instead.  Following instructions to form a potato roll, it took close to three cup of flour to form a dough.  Dumplings were boiled and then covered in a mushroom, bacon, onion gravy.
Scaled for Likability: Good
Real leftover mashed potatoes would have been better for both a richer taste and better texture.  I am guessing dumplings were a standard meal staple for a cheap filler.  However, flour is not a cheap as it once was and using four cups of flour for one meal seems excessive.  Hopefully, next time these are made it requires lots less flour.