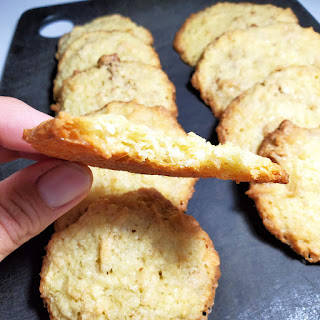 When researching different potato recipes, in the obscure hidden files of the internet, I stumbled across one rouge image of a potato cookie. After narrowing results, I then came across a few select posts about potato flake cookies.. Comments were few and far between and step by step pictures or videos were nonexistent. Taking a leap, I settled upon Crispy Potato Flake Cookies mostly because the cookies contained pecans.
Modifications Made:
Recipe was cut in half and followed to her specific instructions to the amount of egg used. Sugar, however, was reduced to just a half cup instead of three quarters. Coconut was replaced with quarter cup sweetened and quarter cup unsweetened as I feared the cookie being extremely sweet otherwise. Walnuts replaced pecans and were only lightly toasted instead of well toasted.
Scaled for Likability: Good
Really with no previous experiences and nothing to base results against, as long as the cookie was edible, I considered them a success.
Would I eat them again if served as modifications made? Yes, otherwise they would be too sweet to eat. Way to sweet.
Would I make them again? Maybe. They are a great way to use up coconut flakes and I would like to try with even less sugar, more flakes, and double the walnuts. If I could figure out how to keep them in a more ball shape like coconut macaroons, then dipping the base in bittersweet choc would be good.