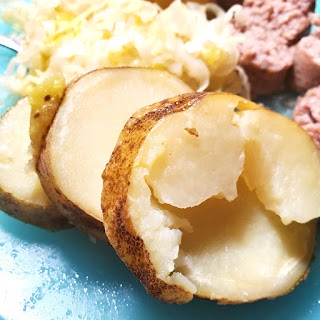 Yesterday in the making of Sweet, too many potatoes were boiled.  Thinking I was gonna make leftover potato dumplings, they were just tossed in the fridge as soon as they cooled.  Tonight, I had no intentions of working that hard for dumplings so instead the potatoes were sliced thickly and pan fried in a garlic butter/oil mixture.

Scaled for Likability: Good
For a first time off the hip recipe these were not bad.  They were like large bites of baked potato.  Not what I had in mind.  Tomorrow, since yes there are still leftover whole boiled potatoes, the slices will be thinner, fried in just oil/bacon grease, and a heavy garlic butter sauce will be poured on top as soon as they are done.